History is repeating itself; this is a statement in which we truly believe in, as a suggestion reminding us of an unwritten rule that help us acknowledge our mistakes and erroneous steps of the past in order to lead the way for a better future. 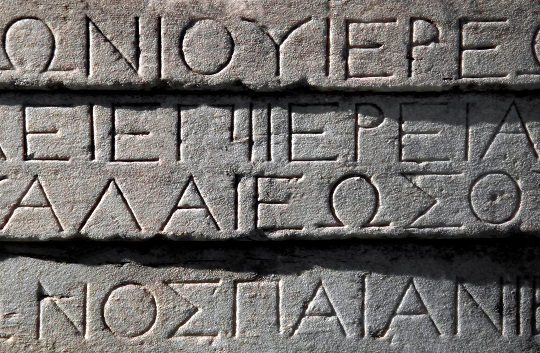 Our world represents a mosaic of people, ideas, traditions, countries and organizations; our planet has been through dark and bright eras for millions of reasons. Periods of peace and periods of war and financial conflicts have shaped our history. Something we’ve learned in every tough period is that there are moments and events which arise to remind us that strong values do exist. Those are the moments which enrich people with the strength, the vision and the courage not to give up.

Such moment occurred on September 1957, right after a very difficult period in Greece, the civil war. A brilliant Greek economist, Xenophon Zolotas, made two historical speeches that enlightened the spirit, the substance and the grandeur of Greek Culture.

I always wished to address this Assembly in Greek, but realized that it would have been indeed «Greek» to all present in this room. I found out, however, that I could make my address in Greek which would still be English to everybody. With your permission, Mr. Chairman, l shall do it now, using with the exception of articles and prepositions, only Greek words.

I eulogize the archons of the Panethnic Numismatic Thesaurus and the Ecumenical Trapeza for the orthodoxy of their axioms, methods and policies, although there is an episode of cacophony of the Trapeza with Hellas. With enthusiasm we dialogue and synagonize at the synods of our didymous organizations in which polymorphous economic ideas and dogmas are analyzed and synthesized. Our critical problems such as the numismatic plethora generate some agony and melancholy. This phenomenon is characteristic of our epoch.

But, to my thesis, we have the dynamism to program therapeutic practices as a prophylaxis from chaos and catastrophe. In parallel, a Panethnic unhypocritical economic synergy and harmonization in a democratic climate is basic. I apologize for my eccentric monologue. I emphasize my euharistia to you, Kyrie to the eugenic arid generous American Ethnos and to the organizes and protagonists of his Amphictyony and the gastronomic symposia.

It is Zeus’ anathema on our epoch (for the dynamism of our economies) and the heresy of our economic method and policies that we should agonize the Skylla of nomismatic plethora and the Charybdis of economic anaemia. It is not my idiosyncracy to be ironic or sarcastic but my diagnosis would be that politicians are rather cryptoplethorists. Although they emphatically stigmatize nomismatic plethora, they energize it through their tactics and practices. Our policies should be based more on economic and less on political criteria. Our gnomon has to be a metron between economic,strategic and philanthropic scopes. Political magic has always been anti-economic.

In an epoch characterized by monopolies, oligopolies, monopolistic antagonism and polymorphous inelasticities, our policies have to be more orthological, but this should not be metamorphosed into plethorophobia, which is endemic among academic economists. Nomi smatic symmetry should not antagonize economic acme. A greater harmonization between the practices of the economic and nomismatic archons is basic. Parallel to this,we have to synchronize and harmonize more and more our economic and nomismatic policies panethnically. These scopes are more practicable now, when the prognostics of the political and economic barometer are halcyonic. The history of our didimus organization on this sphere has been didactic and their gnostic practices will always be a tonic to the polyonymous and idiomorphous ethnical economies. The genesis of the programmed organization will dynamize these policies.

Therefore, i sympathize, although not without criticism one or two themes with the apostles and the hierarchy of our organs in their zeal to program orthodox economic and nomismatic policies, although I have some logomachy with them.I apologize for having tyranized you with my Hellenic phraseology. In my epilogue, i emphasize my eulogy to the philoxenous aytoc htons of this cosmopolitan metropolis and my encomium to you, Kyrie stenographers.