The concept of Carnival in Greece goes way back in time.It’s something more than “dressing up”, “trick or treat” and “make-believe”, like it’s customary in other countries of the world. 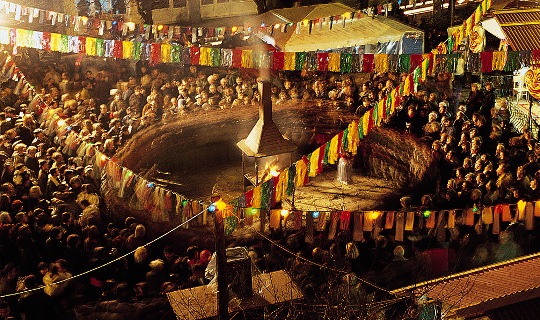 In Greece it’s interconnected with the ancient years –some ancient customs have been preserved intact in particular areas- and oddly enough with Easter. Besides, the Greek Carnival’s peak is “Clean Monday” (Ash Monday). On Ash Monday people abstain from eating meat (only seafood and other local delicacies) and fly kites (!). The Carnival here lasts for 3 weeks and 40 days later -after Ash Monday- the Holy Easter Week starts. So Ash Monday is basically the beginning of the Greek Orthodox Lent period.

things are somewhat quiet, since only few municipalities organize local festivities during the last Carnival weekend. In the Greek capital, this is mostly a celebration for the kids and not so much for adults. However, this is not the case for the rest of Greece, where usually entire prefectures, municipalities, villages and traditional settlements organize and participate in large fiestas that last for days. Special ancient customs are reenacted, peculiar food is being cooked and the atmosphere is somewhat spiritual. The most known and well organized Carnivals in Greece are the following:

Patra’s carnival is the most famous one in Greece. The big parade, which takes place on Sunday before Ash Monday, is truly glorious. Months of preparation, hundreds of people involved and numerous groups and floats, usually under a theme. The city’s bars and clubs are bustling during the entire period and the ambiance is really festive. This is the second biggest Carnival of the country that also includes many local customs reenacted in the villages of the entire prefecture. This year the theme is I.M.M., which stands for “International Monetary Madness”! That automatically means that all costumes and floats will revolve around this theme. Our guess is that it will be crazy funny!

(from the Latin word “Rogatores”, which means “beggars”) are Kastoria’s carnivals and they take place between January 6th and 8th. They basically reenact ancient Dionysian ceremonies, which according to the locals, were aiming to make people forget about the problems of the previous year. All the locals are participating, with singing, dancing and drinking in the streets. During the ancient years, people were dressing up like animals (cows, goats etc.), something that continues until nowadays. 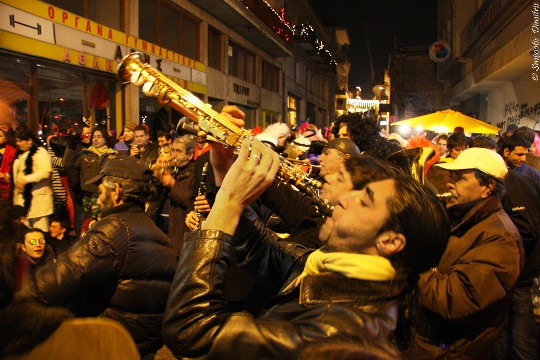 Horisti is a small community (of 2.000 habitants), outside the city of Drama. The Carnival there is a special event with roots that go way back in the beginning of the last century. According to the tradition, the last Sunday before Ash Monday, the habitants are wearing costumes and dance in the fields, to the sounds of weird musical instruments and drink local wine and tsipouro. Nowadays the local band has 500 members, which is a record number if we think about the size of the community!

Undoubtedly one of the most beautiful and picturesque seaside towns in Greece. The usually quiet Galaxidi completely transforms during the Carnival period. All the habitants wander around the city, stores and houses in costumes and on Ash Monday they set fires in central squares, with wild dancing, singing and drinking. The highlight is the famous or infamous (!) “alevromoutzouroma”, which basically is a War with Flour! This is a must festivity and it has followers and participants from all ages! 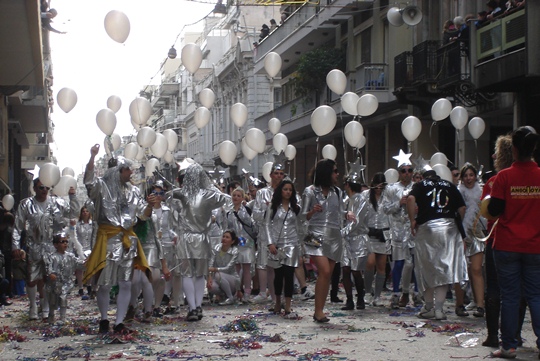 There are many more famous carnival festivities that take place around the country including those in Livadia, Skyros Island, Tyrnavos, Arta, Ioannina, Preveza, Grevena, Kozani, Florina, Sohos and Polygyros. It seems that the locals religiously preserve ancient customs and traditions that not only worth to be observed, but also studied.

This entry was posted in Culture, Events, Tourism Insight. Bookmark the permalink.

3 Responses to The Trendiest Greek Carnivals